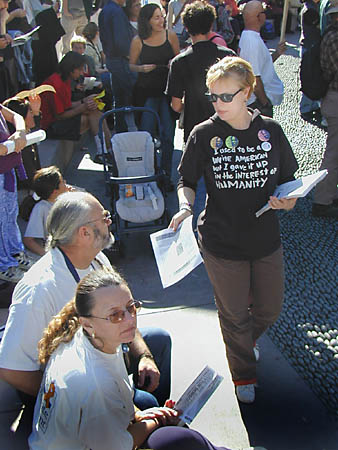 I read an article this morning, a marvelously foul-mouthed rant on Southern sociopolitical hypocrisy, part of which I read aloud to my wife. The interesting point to me was that, though I had read it silently with nothing but wry amusement (and a certain feeling of concord with its underlying perceptions), when I performed it out loud I became almost as anxious as I might have been had I been ranting it myself in all seriousness in a personal encounter.

I am certainly not a trained actor, though I am a pretty decent public reader and presenter, so it leads me to think that the words and sentence structures themselves, when engaged in physically, carried the power to accord my physiological mood to those of the purported speaker.

This is first-year learning for any demagogue-to-be, of course, and I am at least sufficiently aware of that fact to be able to bring it up, but I had thought myself a little more detached.

That “the pen is mightier than the sword” is a truism only in that the pen writes the scripts that those who direct the swing of the sword employ with their underlings. This is a very real power, though, as the history of the last century in particular attests.

It was a refreshing reminder of the power of well-written words.

The writer of the article was well aware of this, too, and evidently quite profoundly conscious that such language might be the famous two-edged sword, raising, as well as righteous agreement in some, an urge in the people directly addressed to get revenge. It has been published anonymously.

Of course, in this day, the folks apostrophized themselves deride “political correctness,” and reserve the right to be insulting and rude. But the history of white-supremacist street violence indicates that they reserve it only to themselves, and are rather tender when they meet the other edge of the sword.

Language may burgeon from the depths of consciousness, or from the soul, or from the subtle buzzings of the universe, but…it is realized in and through our bodies. Far from being a useful and amusing noise, it is the foundation of human culture…for good and for ill. Use it with care.