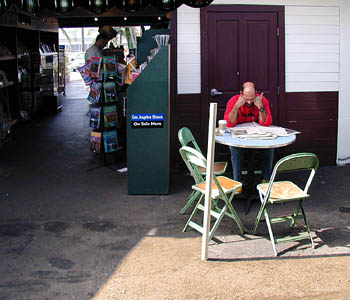 This morning, I glanced over from where I was reading to see my wife listening to music on her smartphone. I’ve done this too, though reluctantly: I don’t mind plugging a smartphone into an amplifier to hear the full range of sounds in the open air. But to listen to digitized sound, which has already lost some quality compared to live music, through a one-inch mono speaker, just makes me laugh. Because it reminds me of my childhood and early adolescence, when we carried around little transistor radios and inevitably held their tinny one-inch speakers up to our dominant ear. I well remember those little plastic bricks, usually finished in fake chrome, and the nine-volt batteries that mimicked their shape. They even came with an earphone jack, for those who like that sort of thing–I don’t, though everyone around me seems to have had earbuds surgically implanted. After FM radio became popular in the big cities, stereo models became available. Then followed boom boxes, with real bass, and finally–cell phones, sucking at digital feeds over wi-fi and the various G-spot networks, and bringing us nouveau lo-fi in a sequined dress.

Which brings me to texting. And of course I do text; it’s almost impossible to live an urban life these days without texting. I’ve decided to play the rebel a bit, and I text in complete sentences, with full punctuation (yes, even unto the semicolon), using a minimum of acronyms and abbreviations. Moreover, I exploit my personal history to indulge myself thus in three languages. My phone, like all such phones these days, provides virtual keypads in many languages and alphabets. And so I jab my clumsy fingers at the screen and curse the genial imbecility of autocorrect along with everybody else.

But what are we really doing when we text? Really, we have invested uncounted billions of dollars in networks and satellites employing the most advanced technology available…so we can thumb-type in baby talk. And in these days of technological maturity the Young and the Clever find it amusing to lard their real-time conversations with text-bred neologisms, so that street babble now sounds like the half-formed mumbles of neglected toddlers….

Texting itself takes us back to the telegraph of two centuries past. Then, too, acronyms and abbreviations, along with truncated grammar, ruled the day, although it was because of the per-word charges, not the arbitrary character limits of the telecoms that now seem to rule our social and political existences. Another Great Leap Backwards of a sort.

More relevant to this blog, and happier to my mind, is the resurgence of books in print. After a flurry of enthusiasms for e-books, and an equally fervent flurry of lamentations that the printed page was dead, the world has seen a rise in sales of actual physical books–especially among the young. The cheapness and portability of e-books have not been enough to offset the less-satisfying experience of reading on a phone or tablet, or even on a dedicated reader such as the Kindle, the Kobo, the Nook, and any other device that seems to require the letter “K” in its moniker. I can understand this: despite the old cliché of reading as a purely intellectual experience, of course it has its own physicality. You might not engage in it while swimming or during a bicycle race, but you cuddle a print book in a way that you don’t a slab of hard plastic that also chirps and beeps to alert you of ads some loudmouth wants you to see. A book is less generic and more intimate than a tablet, a phone, or even a dedicated e-reader. A book is entirely itself, a lover, not a face in the crowd. There’s something to be said for that–and the market place is saying it.

Of course i sell my works as e-books, under the principle of No Reader Left Behind, or perhaps All Things to All Men, or maybe Take the Money and Run. But I am happier when I sell a print copy, and not just because I make a little more out of the deal: I love paper books, and always have. My son, in his thirties, also loves paper books and has amassed a significant library. My friends and colleagues, young and old, prefer paper books for their own perusal. And most of us find browsing the aisles of a bookshop or library far more satisfying than being guided by Amazon’s algorithms to books as close as possible to books we’ve read before–a practice which narrows our lives and obliterates serendipity. Book culture simply makes life better, and helps us grow more civilized. Survey after survey shows the same.

And yet I do read some books on my phone–mostly books in French that are just too expensive for me in print right now, even used, if I can find them used. I’d rather read those books onscreen than not read them at all. At the moment, I’m on my fourth Victor Hugo novel, all of which I’ve read on a cheap Android–yes, one thousand to fifteen hundred pages each on paper, and well worth any effort!

And of course I write for this blog, and other people’s blogs as well, supporting a literary genre that has ever existed only online. I’ve been blogging now for nearly twenty years. People who are reading a blog are, after all, reading. And nothing is more human than the written word, as I mentioned just last week.

So buy a book (preferably one of mine); buy it in paper or as a stream of quantum burps, it doesn’t matter. Curl up on a couch and read it. You’ll be happier, and you’ll have held back the inevitable entropy of creation by doing so–since in reading you connect with other hearts, other minds, across space and time, making “old” and “new” irrelevant.