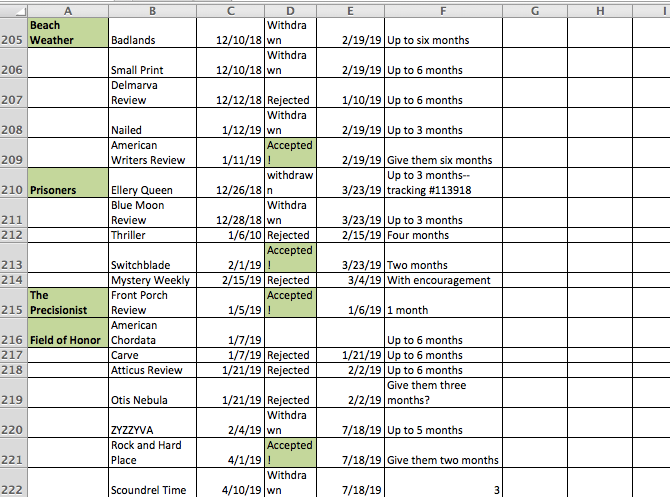 The truth is likely that many more good stories are written than are read. Too may authors fear rejection so much that they do not even try. I know, because I myself wasted decades not trying. While I had no problem submitting factual pieces to various journals–essays, editorials, and articles–that was easier for two reasons: the editorial bar is lower, and the emotional bar is lower. The editorial bar because honesty and readability are the main criteria, along with a willingness to do one’s research; and the emotional bar because an article about street furniture or public architecture doesn’t necessarily expose one’s innermost heart. I wrote many such, and I was writing about things that were important to me, situations that would often fill my heart with rage or sadness…but they did not arise in the same dark cave of existence that fiction swims up from. If someone rejects an article, you can figure they have a political reason, or the editorial calendar is full, or they’ve already covered the matter. When a magazine dedicated to fiction rejects your work, they are rejecting you. This is perhaps why hacks are often successful: they have no skin in the game, their stories are just product, and submitting them is no more than a necessary adjunct of making a living.

So “serious writers” should do the same. Since I flatter myself to be a “serious” writer, I tried it out: and it has worked. I haven’t made much money from the process–less in a year and a half than I have made from a single article on transportation development, say–but I am getting published and laying the groundwork for a future edifice of success and perhaps even income.

Since I started treating submissions as a business–not the writing itself, but the submitting of it–I have, in a year and a half, placed twenty-one stories in edited journals or anthologies, of which thirteen are currently available, with the remainder to be published by the end of this year.

The secret? I research magazines and try to match stories to their editors’ desires, and I keep sending them out! I can not sufficiently emphasize the necessity of persistence: while a story occasionally finds a home on its first time out, by far the majority of the stories I have published have been rejected at least once, usually four or five times, and in some cases nine times, before hitting print.

I send out so many stories that I use a spreadsheet to keep track of them. And while I do not love being rejected, I don’t let it bother me.

Don’t let it bother you either. Edit yourself, rewrite carefully, and format properly–and not every editor prefers the same formatting; they generally tell you in the submissions guidelines what they want, and if they don’t, then always use standard manuscript format. I put short stories through at least three and up to nine revisions before I call them done. Then out they go: I send each story to three journals at once, and every time one is rejected I send it right out again the same day, until it sells or (very rarely) I give up on it.

We’ve got the Internet now, so it’s easy: no stamps to buy, no trip to make to the post office. You have no excuse. I shouldn’t tell you this, because you are, if you are a writer, my competitor, but: you can do it. Write, rewrite, submit: that’s what it takes. The world needs more good stories, so get to work.