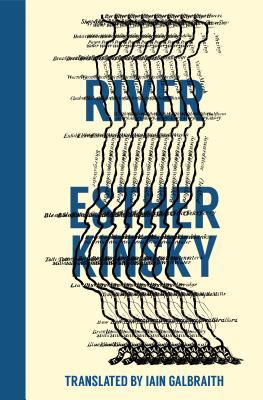 Esther Kinsky’s recent book, River, is not easy to categorize. Is it:

The answer, of course, is:

Nothing much happens in it, and the settings are uniformly dreary: wastelands under busy railroad embankments or thundering highways, abandoned playgrounds, derelict factories, homeless camps, fetid marshlands strewn with garbage; shabby lanes populated by mangy dogs, stray cats, and forlorn souls who are not so much lost as discarded. Thrift shops, cheap eateries, tumbledown squats, and a colony of observant Jews, blending with refugees and half-wild gangs of belligerent children. Yet it is absolutely beautiful and engaging, rich with detail observed in both natural and urban settings, and most of all in the borderlands where the two worlds overlap, along a number of rivers in London, in central Europe, in Israel, in Canada, and in India.

The main narrative itself is told by an unidentified woman who has moved to London for a set term, perhaps, as it later transpires, to mourn her father, who has recently died. She spends her days walking along the unprepossessing banks of the River Lea near where it meets the Thames, exploring as much of it as she can possibly reach, observing plant, animal, and human life, and examining the artifacts of human life, be they buildings, transportation infrastructure, or debris of all sorts. Sometimes she takes trains or buses, but most often she just walks, taking occasional photos as she goes. Sometimes she uses a Polaroid, sometimes a 35mm camera whose film, if it is black and white, she develops herself. Sometimes she buys old lost photos, as well as other family junk, at thrift shops.

Many of these walks lead to chapters of reminiscences of other walks along other rivers, when she was a child, when she was caring for a child of her own, and during the between-times when travel is easy. No mention of her child is made except in one chapter recounting an earlier and nearly as lonely stay in London. Perhaps it died; perhaps she is just older now, and the child is grown. It doesn’t matter. She does often mention her father–no one else from her family past. She has made a few acquaintances in the neighborhood, but no friends. This is evidently as she prefers.

The richness of detail, the subtly poetic expression of setting and mood, make this one of the most quietly passionate books I’ve read. It’s not a rollicking story; it’s hardly a story at all; it is immeasurably worthwhile. From the texture of the bricks she can see on the wall opposite her window, to the habits of the crows and cats of the neighborhood, to the light of dawn or dusk over the estuary in the distance, every possible sense impression is purified to a transcendent clarity, with no verbal showing off (at least if one can count on  the honesty of Iain Galbraith’s superb translation from the German).

There is not much more to say except that River is a significant and enlightening book. Go into it expecting nothing, because nothing you could expect could prepare you for it. Your soul will be bigger when you’re done.