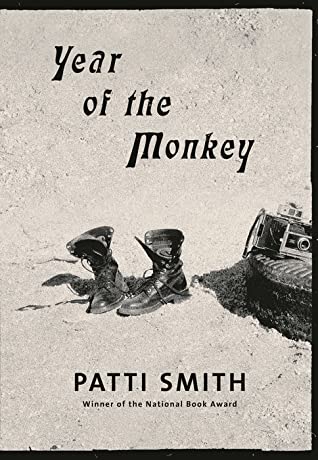 Just finished Patti Smith’s Year of the Monkey. Superbly written, with echoes of Pound and Bukowski, among others, and an overall feel similar to chapter 14 in Joyce’s Ulysses, with its time shifts and conflation of memory, reality, anticipation, and dreams…not surprising, given Smith’s age and the experiences that shaped her.

Is it a memoir, is it even nonfiction? Whatever it is, it works as elegy, with Smith, most famous as a rock-and-roller, approaching and passing her seventieth birthday as friends die off: more than the herky-jerky road novel it appears to be on the surface, it’s a meditation on aging and death, both immediate losses and the memories of past deaths, and not just deaths but half-deaths.

The characters she meets, or thinks she meets, or both meets and later reconstructs as symbols, transcend the clichés of slumming phonies such as Kerouac, and result in a richly imagistic, intense, and fundamentally poignant tale of a brilliant woman facing the inevitability of her own eventual decline and death.

But there is no sign of decline in her writing: it is strong throughout, deeply felt, and only now and then too obviously constructed. Perhaps the experience suffers from an incessant self-regard of the sort that makes confessional poetry ultimately tedious, but that may be unavoidable given her themes.

Well worth the time spent reading it.