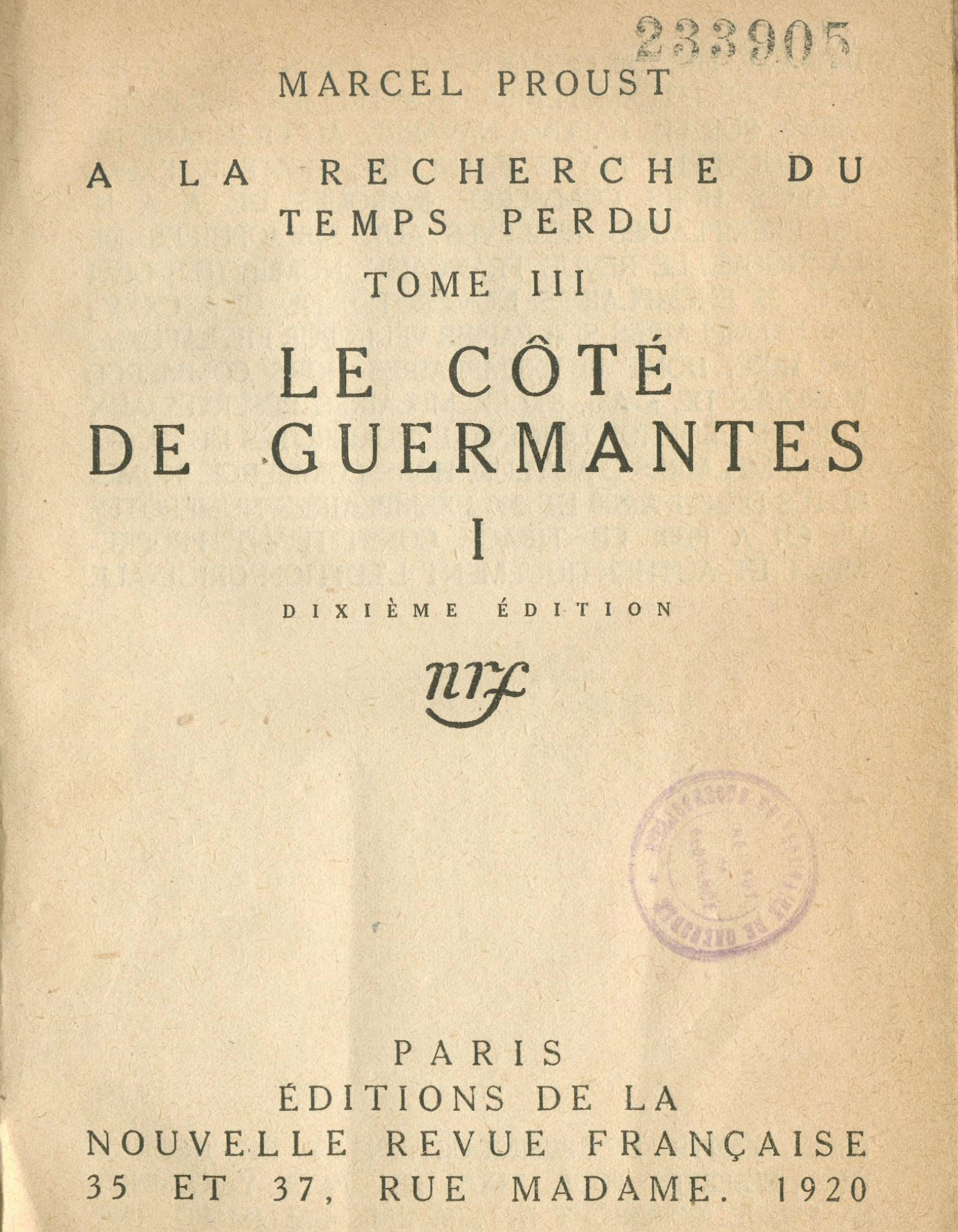 If only Proust were not so parsimonious with his comic writing! Just laughed through a short section in the salon scene of “Le coté de Guermantes,” book II, with Mme. and M. Guermantes feeding each other hilarious sarcasms at the expense of a third party not present. Cruel, but funny.

He’s done this before, way back in the very first part, when M’s mother waxes sarcastic; he’s a master of the snide remark…. Unfortunately he is without doubt a snob and too self-conscious to let go very often…. Well, it was fun, though!

With library call-ins slowed considerably by having to quarantine all returned books for a week, I am stuck having to read Proust again, and listen to the long baseless speculations on human nature indugled in by his overprivileged and terminally fussy protagonist. At least Proust has the decency to slap “M” in the face with regular disillusionments, but the damn fool seems to have a flat learning curve. Also, everybody seems to love him, though ll he does is alternate between pontification and whining.

I have been particularly struck by his abhorrent attitudes towards women in this section (“Le coté de Guermantes,” book 3), which makes the callowest of daddy’s-money frat boys seem mature.

And he is back to long, plodding, periodic sentences here.

If it’s sarcasm (which I hope), it’s a bit too subtle, especially considering that when he dares lower himself from his pedestal, Proust can write great comic scenes.

We already know, from the author’s ham-handed foreshadowings, that he ends up marrying Albertine, but since the titles of her volumes translate as “The Prisoner” and “Albertine Disappears,” I am not optimistic that M matures gracefully. But we’ll see.

I have finally finished with part 3 of “Le coté de Guermantes,” and have I got a book for you! If you have ever read through and enjoyed the “begats” in the Old Testament, you’ll love Proust’s intricate disquisition on the habits and lineages of the local aristocracy, as the visitors at Oriane’s salon endlessly dissect all absent parties, most of whom are cousins by blood or by marriage or by some cosmic connection that ensures an incestuous air to the whole shindig. M, the author’s alter ego, comments on this cousinship, as on everything else, but only in extended asides to the reader, while keeping his mouth safely shut for the most part in the actual story line. After all, he is outside blood–though it is still never made clear why these pathologically self-centered examples of why there are revolutions accept him, as he contributes little to the conversation except the occasional interrogatory comment, or a fatuous opinion on art or music.

The saving grace is that Oriane (the Duchess that M had been in love with, and fallen out of love with, before he ever actually met her), Oriane is given center stage to exercise her gift for sarcasm, which she does at length, only to suffer repeated interruptions as her husband steers the conversation back to ancestral pomp.

Eventually M breaks away for his previously arranged midnight visit to M. de Charlus, who makes him wait while he attends to previous visitors, and then indulges in an extended hissy fit and breaks up, or doesn’t, with M. The growing homosexual overtones of the whole mess erupt from latent to blatant in the next volume, which Proust has subtly titled, “Sodome et Gomorrhe,” but for the moment you’re left guessing. (So far, Proust, who was himself gay, has not been particularly charitable in his depictions of nonbinary characters.)

Also, Swann puts in an appearance, after a long absence, and reveals, rather casually, as you might mention that you bought new shoes, that he is dying.
M goes home and, not surprisingly, devotes many sleepless hours (and pages of meandering sentences) in musing over all this, then, returning to the theme of the first sentence, goes to sleep.

This part 3 of “Guermantes” has been the slowest going yet in my slog through Proust. I must say that the first pages of S&G are decidedly more interesting, as M. once again spies on a tryst (remember his accidental surveillance of Mlle. Vinteuil’s lesbian love nest in “Du coté de chez Swann”?), this time between M. de Charlus and Jupien the tailor. Note that a bumblebee is introduced, and its symbolic significance explained at great length by M.

The “lost time” of the title may in fact refer to the hours M devotes to baseless speculation….