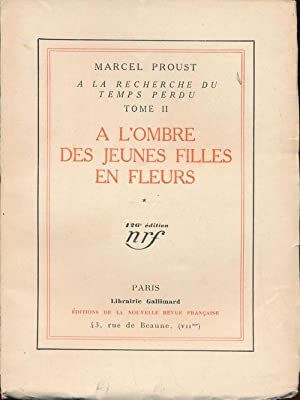 I am done (shall I say, “at long last”?) with A l’ombre des jeunes filles en fleurs, Tome II of La recherche.

When last we left our hero, he was in the throes of a bromance with the handsome, wealthy, and genuinely aristocratic Robert Saint-Loup, but that didn’t last long: for now M is beginning to notice a squad of adolescent girls–all of them stunning, of course, but in different ways–who strut in languid arrogance along the jetty that is one of Balbec’s great attractions. These girls, whom M describes as if they were an assortment of chocolates rather than human beings, seem to make a great sport of annoying the f*** out of the other vacationers, moving slowly along the jetty in battle formation to force everyone else to make way for them–in fact, at one point, one of them, exhibiting considerable gymnastic skills, leaps over an old man seated on a bench, then follows up by loudly commenting that “That old man disgusts me.” The old man is actually a dignitary of sorts, someone M sees every night in the hotel dining room (that is, if his wealthy collateral relative Mme. de Villeparisis hasn’t ensconced M and Granny in her carriage for a trip to her own favorite restaurant).

M goes to great lengths to make eye contact with any of the girls, stating to the reader that if they merely notice him they wil inevitably seek him out and invite him along their escapades; however, he does not go so far as to introduce himself, which apparently isn’t done among his class. Instead, he describes the characters he assigns to each girl according to his fantasies, for he is sure that they are liberal with their affections. One senses that the hitherto much-admired Saint-Loup (who considers M his intellectual superior for no apparent reason at all) will soon be abandoned.

But first, we must make time for some gratuitous anti-Semitism, wedged in by the half-Jewish Proust: for M is invited to dinner by his “Israelite” friend, Bloch. At the dinner, Proust trots out all the clichés of “Jewish coarseness”: the loud, boisterous liberties of expression; Papa Bloch’s pretentiousness and braggadocio, especially in his claiming to be friends with high-status people with whom, it turns out, he has only a tip-of-the-hat acquaintanceship; the younger Bloch’s endless showing off of his verbal prowess in overelaborate phraseology (which it’s rather stunning for Proust, of all writers, to present as unseemly); the Bloch sisters’ clannish giggling at just about everything, and their exaggerated admiration of their brother’s bons mots; and in general every stereotype imaginable for the time except for grotesquely hooked noses (Bloch is said to be somewhat handsome, for a Jew), a barely suppressed lust for Christian women, and a desire to take over the world. (I still have five tomes to go, so there’s time.) This, in a book set around the time of the Dreyfus Affair but written considerably after it, when Europe was in the throes of nascent Fascism. No, Proust is no Zola (who wrote in declarative sentences besides).

The tawdry episode over, M returns to the luxury hotel where he is ensconced in time to give his grandmother a disturbingly warm kiss, one of his rituals (don’t forget the rage over the lost kiss of Tome I). But don’t worry: Granny will be nearly forgotten as the “petite bande,” as he calls his squad of coarse but acceptably white girls, captures more of his attention.

But first, a mechanically necessary digression: the friendship M strikes up with a revered older painter of the town. He doesn’t do this willingly, as his focus is on getting the girls of “la petite bande” to notice him, at which time he reiterates they will automatically fall in love with him. But he is nagged into it by Granny and Mme. de Villeparisis, and finally, sullenly, concedes. He goes to visit the painter, Elstir, at his villa, and the painter kindly shows the truculent lad about, explaining the paintings, talking about the places depicted, and overall giving M more attention than he deserves from anyone but a social worker. However, art has its effect, and M allows himself to become fascinated, all the more so when he discovers a painting that is of the young Odette, before she became Mme. Swann. And then–and then!–one of the girls of “la petite bande” shows up at the window and greets Elstir.

M immediately cancels all other appointments to spend as much time as possible chez Elstir, in hopes of seeing Albertine or one of her friends again. It is during one of these sojourns that the reader encounters what is by far the best-written paragraph in the story up to this point, when Elstir, reacting to M’s oft-expressed admiration for the nobility, lectures him on the uselessness of good breeding, explaining how a character of true worth derives from what one makes of experiences in the real world, not from bloodlines or the platitudes showered upon one by parents and tutors. It is truly fine, and I present it here untranslated. One could inadequately but humorously summarize it by the current comic proverb stating: “Good judgment comes from experience, and experience comes from bad judgment.”

And, yes, that is just the middle of a expansive Proustian paragraph….

It sometimes seems to be that Proust writes truly well only when he is speaking through a character.

However Albertine does not show up at the window again, so M contrives to nag Elstir into a walk along the jetty, habitual haunt of the gang. Elstir consents; they go; the gang appears and recognizes Elstir; the aged painter steps up to say hello–and M hangs back, pretending to be interested in something in a shop window nearby. Elstir assumes M does not want to meet the girls, so the next time M looks up, he is devastated to see them waving at the painter as they walk away.

Follows a longwinded expostulation of adolescent angst and self-doubt, seasoned with a bit of rancor at Elstir, which he eventually expresses in attenuated form. Elstir responds with remarkable aplomb, and somehow, in a manner left somewhat unclear by Proust, the introduction is made, and within a page he is a favored friend of the gang, with whom he hangs out every single day.

At this point M feels himself to be in love with Albertine, though the other girls are prettier. Albertine is the wittiest, and while M devotes much maundering to ranking the attractiveness of the girls relative to each other–expostulating at great length on shapes of noses and cheeks; color and clarity of skin; height, build and pose; and physical defects temporary or permanent–he remains abstractly dedicated to Albertine alone. He also expresses his dismay at finding that the girls are in fact virtuous–even Albertine, the only one of the crowd who is not rich, but is included as a sort of charity case. It may be to his credit that his heart remains attentive to her, though the only way he feels he can make his affection known is to pretend to favor Andrée, the prettiest of them all. Andrée becomes, perhaps more out of a sense of duty than true compassion (yes, M, explains this too) his confidante. But Albertine, who is not the naive pet he seems to think her at first, is not fooled. Neither is the reader, because M naturally explains his emotional states and his relations with the gang, and the ways they change day by day, at great length. And more: Proust, always clumsy with foreshadowing, has M make several references to a time in the future when the adult M and Albertine are on the verge of breaking up. When that will occur–I have at least 2000 pages to go–I will not hazard to guess, nor will I look it up.

Let us fast-forward to a time near the end of the season when Albertine is set to go visit an aunt for eight days. Because of the timing of the train she must take, she will spend the night in M’s hotel rather than at the relative’s house just out of town where she usually stays. She invites M to come sit by her bedside that night after she has gone to bed. M misinterprets this rather disastrously, and, well, tries to jump her. She, having warned him repeatedly to back off, finally pulls the cord that summons the concierge, and, rather than inviting M to accompany her to her aunt’s house as he had hoped, puts him on suspension. However, later, having let him stew for the eight days, she informs him that she has not told any of the gang about the incident, and that it is a sign of her favor that she forgives him. Nevertheless, she remains cold to him through the rest of the season.

(Let me digress, as Proust would…. These are people who can afford to spend the entire summer and part of fall in an expensive resort. In fact, M has not only his grandmother along to watch over him, but the loyal family servant, Françoise, who is treated as a sort of noble clown by Proust, whose mouthpiece, M, comments frequently on her bad grammar. Had Proust been an American writing at this time, he would no doubt have included various buffoonish portraits of loyal black servants mangling grammar, and M would have ended up a frat boy in the Ivy League somewhere, much like the characters in some of Scott Fitzgerald’s regrettable short stories of that era.)

M then mumbles a long essay-like meditation on how “love” is really only a projection of one’s private psychological clichés onto partners one can never really know. This is insightful but not really characteristic of M, at least not at this point in the story. It is of course a much older M who is narrating, so I guess it’s all right, although the sentiment is as bleak as any Russian existentialist’s. Then again it may in many cases be true.

And now, I will let Proust rest. I am going to read something, anything, written in declarative sentences, and featuring characters who do something. I need a break. I’m sure you do too.